One of the most talked about new features of the Apple Watch is its ability to sync with an iPhone’s Passbook app, displaying a user’s credit cards and boarding passes easily on the wrist. Australian-based airline Qantas, however, has been facing a bit of a sizing issue with Apple’s new wrist-worn device, with multiple users pointing out since the wearable’s launch that a wrist wearing the Apple Watch simply doesn’t fit under the gate scanner for boarding passes (via Brisbane Times) 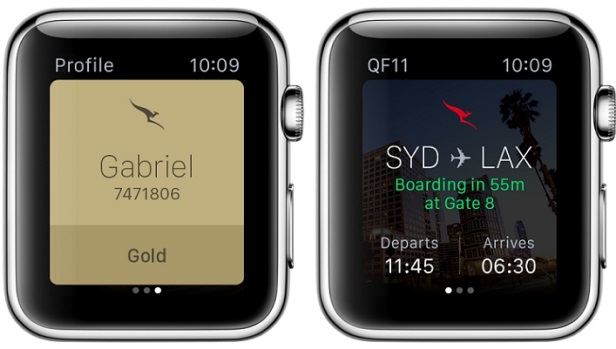 Qantas’s new Apple Watch app
Like other boarding pass experiences, Qantas’s app generates an individual QR code to the Passbook app for users boarding a flight. While the scanners were initially designed for simple paper barcodes before smartphone apps came about, they were able to handle scanning the QR code from an iPhone or other smartphone. Now, with the introduction of the Apple Watch, Qantas’s scanners face the hurdle of being unable to accommodate an entire wrist along with the Apple Watch.

Pointed out initially by a few Twitter users, one of which “wasn’t allowed” to take a picture of the terminal in question, Qantas has since acknowledged the issue. Unfortunately, while it’s looking to “access” the problem, there is currently no planned fix.

@taufiqz Hi Taufiq, currently we're unable to scan boarding passes from the Apple watch, our team are aware of this and assessing. Kristyn

Qantas’s predicament serves as a sort of warning for developing an app for the Watch before actually having the device in hands to test. Qantas’s lead app designer, Gabriel Santos, echoed a similar sentiment of difficulty in developing the app, describing the entire ordeal of building and creating the app without the Watch “a scary process.”

“We initially locked in a concept but when trying it on the actual device, it didn’t work as well as I thought it would,” he said.

“It proved that designing without testing on the actual device can compromise the user experience. Good enough just isn’t acceptable. I wanted to bring the Apple Watch experience to a whole new level.”

As Brisbane Times points out, the introduction of a smaller, more handheld scanner could alleviate the issue, but would undoubtedly be extremely costly to introduce in every airport the airline supports. Given that the Qantas app includes a host of other features besides supporting Apple Watch, from boarding times, departure gates, and delays, the company could also decide to leave the QR code functionality solely to the iPhone and introduce the Apple Watch’s Qantas app as more of a companion experience.