The latest numbers from market research firm IDC‘s Worldwide Quarterly Tablet Tracker reveal that Apple continues to be the largest vendor in a declining tablet market, shipping 12.6 million iPads in the first quarter of 2015 to capture a 26.8% share of the global tablet market. Apple maintained the top position despite facing a 22.9% decline in tablet shipments compared to the year-ago quarter. 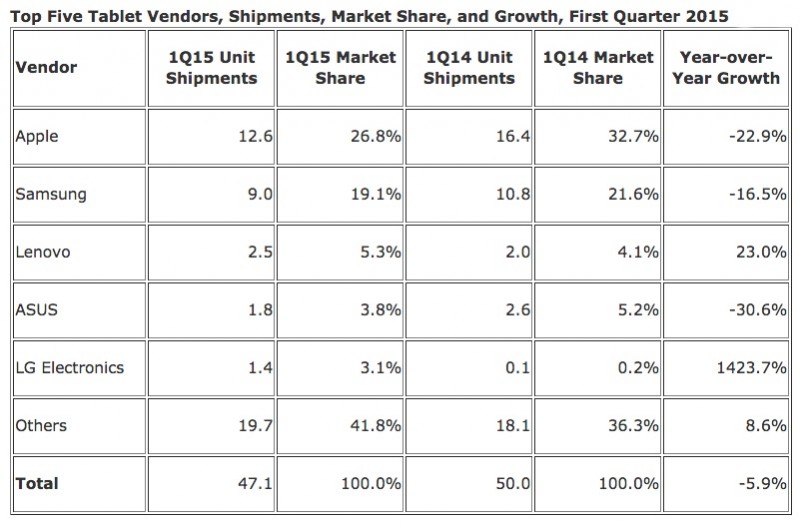 Samsung was the second largest tablet vendor with 9 million tablet shipments in the first quarter, good for 19.1% market share in the global tablet market and a 16.5% year-over-year decline. Lenovo, Asus and LG Electronics rounded off the top five, with 2.5 million, 1.8 million and 1.4 million global tablet shipments in the first quarter respectively, with a combined 12.1% market share.

Apple, Samsung and several other electronics makers are feeling the effects of a prolonged slowdown in the tablet market, with the iPad declining in annual growth for five consecutive quarters and competing tablets experiencing similar trends. The launch of the larger iPhone 6 and iPhone 6 Plus and lack of major updates to the iPad lineup since 2013 are likely contributing factors to falling iPad sales over the past few years.

Apple CEO Tim Cook, during the company’s recent earnings call, said he believes that continued investments in the company’s product pipeline and shift to the enterprise market will help the iPad be an “extremely good business over the long-term,” although he stopped short of providing a forward-looking statement about when iPad sales could begin growing again.

“And so my belief is, that as the inventory plays out, as we make some continued investments in our product pipeline, which we’re doing, that we already had planned and have had planned for some time,” said Cook. “Between that, the inventory playing out, the enterprise starting to take over, I think still, i believe the iPad is an extremely good business over the long-term. When precisely it begins to grow again I wouldn’t want to predict, but I strongly believe that it will.”

Previous We need VIP for all messaging, not just Mail
Next New Windows 10 app store features include subscription billing and better app discovery