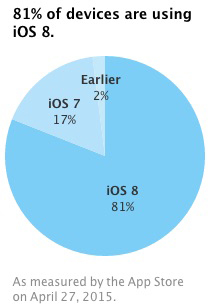 Apple’s latest distribution numbers show that 81% of iOS devices are now running iOS 8 or later, less than one week after the release of the Apple Watch. 17% of devices used to access the App Store continue to run iOS 7 and the remaining 2% are running an earlier software version.

iOS 8 adoption rose 2 percentage points since Apple shared its last distribution numbers earlier this month, with the Apple Watch launch last Friday likely contributing to the marginal increase. Apple Watch must be paired with an iPhone 5 or later running iOS 8.2 or newer.

According to mobile analytics firm Mixpanel, approximately 91% of devices were running iOS 7 at this time last year, meaning that iOS 8 adoption continues to be slower, likely due to a wide range of reasons including software bugs and excessive storage space required to install updates.

Previous More Windows 10 features like Windows Spotlight lockscreen shown at Build 2015
Next Continuum will be built into Windows 10 for Phones, turning your phone into a PC