The latest numbers from research firm IDC reveal that the smartphone market continues to be a largely two-horse race between Samsung and Apple, which accounted for 21.7% and 14.1% market share in the second quarter respectively. The rival tech companies finished well ahead of Chinese competitors Huawei, Xiaomi and Lenovo with a combined 35.8% market share during the three-month period ending June 30. 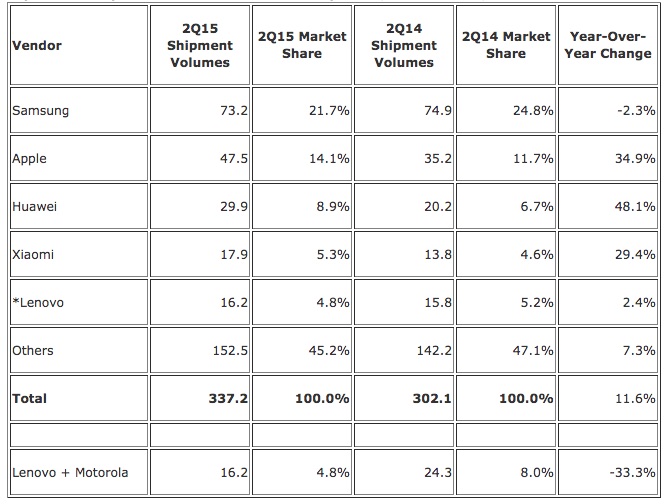 Apple increased 2.4 percentage points to 14.1% during the second quarter compared to its 11.7% market share in the year-ago quarter, while market leader Samsung experienced a year-over-year decline as its market share slipped from 24.8% to 21.7%. Apple closed the gap on the continued strength of the iPhone 6 and iPhone 6 Plus, with the company announcing it sold 47.5 million iPhones in the third quarter of the fiscal year earlier this week.

Apple and Samsung continue to dominate the smartphone operating system race, trailed by Huawei, Xiaomi and Lenovo with 8.9%, 5.3% and 4.8% market share in the second quarter respectively. All other platforms accounted for a combined 45.2% quarterly market share.